July 6, 2020 by My Case Helper Editor News
Home | News | What To Do If A Friend or Family Is Detained By ICE 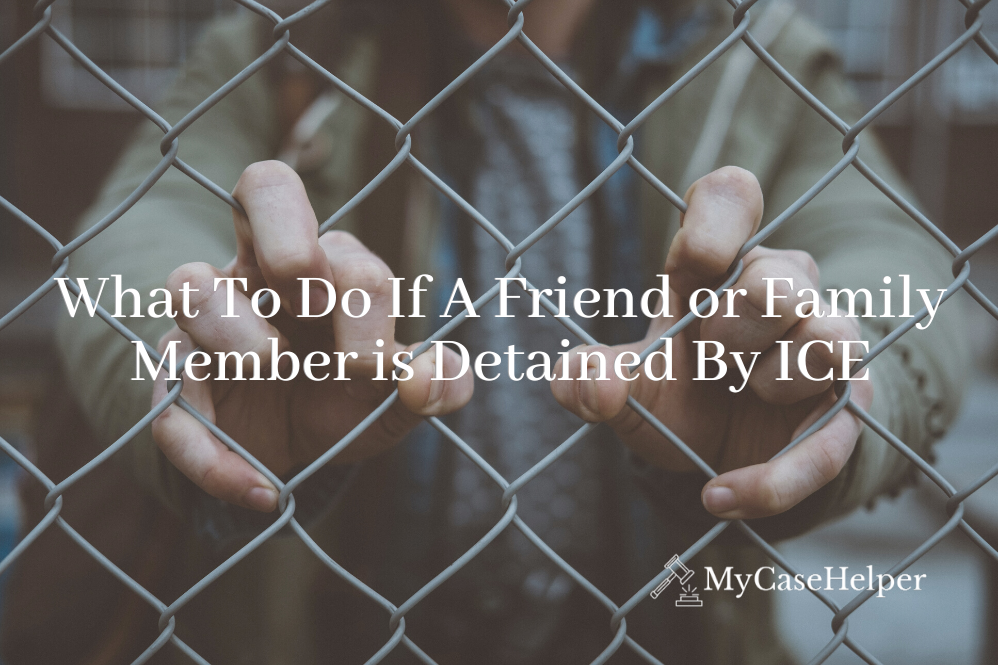 During this process, you should seek the legal counsel of a lawyer or legal aid. Even if you cannot afford a lawyer, there are ways you can find discounted and even free legal help.

Finding Someone Detained By ICE

If someone is detained by ICE, it’s vital you find them right away. Locating the detainee will ensure that they stay safe and none of their legal rights are violated. Many immigrants end up going missing after ICE arrests. It’s an issue that many immigrants and lawyers alike are trying to prevent.

Many immigrants go missing after being arrested by ICE, and it can be nearly impossible to find the missing person in many cases. This can put many loved ones at risk and in danger and can cause stress for their friends and family.

Knowing what to do if someone is detained by ICE will help you find the missing person faster. Thousands of immigrants, including children, go missing from ICE detention centers every year.

To find someone who’s been detained by ICE, you need to obtain their Alien Registration Number. Next, you can either check the ICE detainee locator on their website or check with your local county jails. Depending on how the detainee was arrested, their location may change. Before you go looking for the detainee, be sure to understand how they were arrested.

What To Do If You Cannot Find Someone

You still have options if you cannot find the detained immigrant, or ICE will not release information on them. First, contact your attorney or immigration lawyer. Your lawyer will ensure the detained person’s rights are not violated.

Even immigrants deserve to have the same rights as any other American citizen. If ICE still refuses to release information on the detainee, call the detention center and:

During this conversation, remember to explain other information that’s important to the health and safety of the detainee. For instance, if they do not speak English and need a translator, or have a medical condition that requires attention.

Know Who To Trust

Similarly to normal arrests, anything you say can and will be used against you. When you call the immigration officer, only speak to them about speaking to the detainee. Detained immigrants should also refrain from saying anything regarding their own personal information until they get to speak with an immigration lawyer.

Do not mention anything regarding the detainee’s citizenship, country of origin, or immigration status. Most importantly, do not sign any documents the detaining officers give to you until a lawyer reviews them. Signing these documents could potentially waive any right to a deportation hearing.

Keep in close contact with your immigration lawyer about everything that happens. Your lawyer will ensure that you do not do anything illegal while also ensuring the detainee’s rights are not violated.

Although it’s tempting to take any plea the officer offers, do not take any deal without speaking to a lawyer first. Your lawyer will let you know what options you legally have and should receive. If your lawyer works with ICE officers often, they may have some insight as to what kind of deals they can offer, or will know if the officer is a frequent violator or immigrant rights.

Your immigration lawyer can show you and your detainee what relief options you have. As mentioned, do not make any deals or sign any papers ICE gives to you until you have spoken with a lawyer.

Your immigration lawyer can find you a number of solutions such as asylum, withholding of removal, temporary protected status, cancellation of removal, and more. ICE detention centers may also offer a bond or “bail” for detained immigrants. The smallest amount of bond a detainee can have is around $1,500. However, depending on the detainee’s case, the bond can be as high as $20,000. If you are able to pay your detainee’s bond, they must still cooperate with any court proceedings and scheduled hearings.

If the bond amount is too high, your immigration lawyer can petition to have the bond reviewed by a Judge. Depending on the circumstances of the detainee and the arrest, a Judge may release the individual or grant a lower bond.

Need help finding a qualified immigration lawyer near you? My Case Helper works with thousands of lawyers across the US who can help you or your loved one get out of ICE’s hands.

To get free legal advice and to find an immigration lawyer near you, call the number listed at the top of the page.